Today during the assembly period at the Madison Academy the gymnasium was filled with over 400 people including Madison Campus Elementary students, local community members, and guests from the Cumberland View Towers.  Mrs. Fuentes, principal, welcomed everyone to the Veterans Day Tribute and had prayer.  Madison Perkins and Parker Rufo, both 8th graders at MCE brought the United States and Tennessee state flags to the front.  The Madisonians sang our National Anthem.  The Pledge of Allegiance was started by Howard Mackye, Retired SSG, US Army and assisted by William Buzby, MA Freshman.  Both are part of the ASSIST program as mentor and mentee.  Camden Armstrong, MA Freshman rang a handbell 11 times as the audience remained quiet in thought.  Tyler Bell, MA Junior and his grandfather, Owen C. Bell, Retired Major, US AirForce read a history of Veterans Days prepared by Mr. Kevin Ramkissoon, MA history teacher.  Andrew Ware read a letter that had been sent home from a soldier in World War 2 that explained why he would not be home for Christmas and why dads fight in wars.  It was sad to learn that he was wounded in battle and died a few days later.

Spencer Boskind, MCE 8th grader and Sean Moore MA Senior, both part of families that had served in the military, gave a special thank you speech.  Then Mr. Jeff Fisher, M.Div, BCC and VA Chaplain from the veterans affairs asked each group of veterans to stand and receive a special gift of gratitude.  The MCE Second grade also gave out gifts to the veterans that they had made in art class with Mrs. Woods.  The Madisonians sang a “Tribute to the Armed Services” melody and those that had fought as well as family members were asked to stand as their military branch song was heard.  The tribute ended with a closing prayer by Mr. Michael Shofner, MCE Principal.  Below are some pictures of the event. 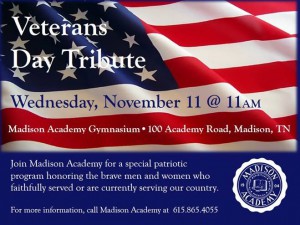