Yesterday, the Madison Academy golf team won 1st-Parker Rufo, 2nd- Josh Hardin and third place-Andre Crayton in the Tennessee Christian Athletes Association [TNCAA] golf tournament held at Riverside Golf Course. Parker shot a personal best 55 and tied with Josh after nine holes.  Because of time constraints officials had a card playoff to determine the winner.  The seventh hole was considered the hardest hole and Parker had the better score so Parker was declared the champion. 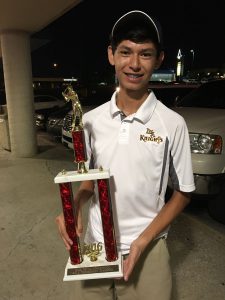 In other MA Athletics news the cross country team competed at Lancaster. The boys and the girls finished in first place as a team.  Eight of the boys team members competed and all of the girls. Here are their individual times and places.