The Student Association is again hosting a late night volleyball tournament the Saturday night of Alumni Weekend. You can sign up by clicking this link.  It is free to watch and cheer and there will be snacks for sale most of the evening.

National Honor Society members this year decided to repeat what was done last year and start a new recycling program.  Coach Adams is spearheading this effort.  The Waste Management team was contacted and together developed a multi year plan to recycle here at the Academy and Laundry.  Phase 1 started by clearing out a space to store the recyclables and get blue recycle containers at the Linen Services and teacher’s copy room for employees to use.  Coach Adams shared with the staff what could be recycled and what was trash.  NHS members were divided into five teams of four members each and they at least once a week empty the recycle bins and transfer the materials to the holding area.  The program may after a year start to bring in enough revenue so that the NHS will be self-sufficient.  Any excess monies would be used to benefit our local community and other needs.  If you would like to help with this project please contact Coach Adams.

Last week, Monday thru Friday, the students and staff played a part in the extended learning opportunities that happened off campus.  The Junior class started this week with the annual history tour led by Mr. Ramkissoon, the history teacher.  Leaving campus Saturday night, 22 students and five adults left for the adventure that began with a tour at Gettysburg and then on to Philadelphia to see Constitutional Hall, the Liberty Bell and the new American Revolution Museum.  Later at Valley Forge the tour guide immersed the group in daily life in the army.  The final days were spent at Washington, D.C. visiting the Newseum, the White House, the Smithsonian-US History Museum and viewing the many monuments: MLK statue, Jefferson memorial and others.

The next day the Seniors and their sponsors went to Southern Adventist University to experience first hand what college is like.  After supper the Gym-Masters performed, then the students went to the church to enjoy a concert by Josh Wilson and then an ice cream social.  The following morning college personnel shared general college information.  After lunch the each student went to the departments they wanted to know more about.  Brianna Burks, said that participating in the Nursing program was the best part of her time there.

While the upperclassmen were away, the Sophomores and Freshmen were involved in taking the North American Division mandated Iowa Basic Tests.  Each morning, Monday-Wednesday students demonstrated what they learned over the course of last year.  When the results arrive towards the end of the month, students and parents will be able to evaluate past learning and project future college readiness scores.

Wednesday at noon over 40 students, staff and parents, left for a short term mission trip to the Appalachia region.  Students were divided so that the could accomplish basic construction projects: installing insulation and building a ramp, as well as moving furniture for a church.

Sunday evening the Student Association had the annual Fall Ball. The theme was color mania–everyone received or wore a plain white t-shirt.  The rest of the evening students painted themselves and others with red, blue, green, and yellow paint.  There was a snack table of fruit, crackers, and some candy.  Later in the evening students could frost cupcakes with a variety of colors.  There was a maze to navigate through as well as three toss games.  Later students were divided into four groups and used the colored powder on their friends or others.  As evening started s’mores fixings were available next to the bonfire.  The night ended with a fireworks display.  This was the best part of the evening said Kayla Smith, senior.

Come join junior mom, Diana Buzby-Soto, and Madison Campus Church Caring Connection Pastor, Julie Vega, and talk about how to best navigate parenting teens. The first topic is “You Don’t Get It:” Understanding the immature complexity of a teen’s mind. Sunday, September 24, 2:00-3:30 p.m. in the Learning Commons

The Freshmen class decided to wait and select officers after they knew their classmates better.  In chapel this week the officers were announced by their President Leah Higgs.  For the office of Pastor the class chose Marvin Peraza.  Jenny Pedrero was elected Treasurer. The class member responsible for Communication is Patrick King and the Activities Coordinator is Gabriel Brown. 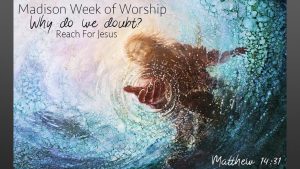 Starting at Indian Creek Camp and continuing each day at school Pastor Kevin Bowen is sharing the story of Peter and asking the question “Why do we doubt?”  Each meeting is started with our Praise Team leading students and staff in worship.  Then Pastor Bowen shares stories about his family and long time friend from college Chaplain Jamieson to illustrate the truths found in the bible.  At the end of the week there is a vespers service that includes some light food and a time to commit to Jesus at the beginning of the year.

School personnel picked up two new Ford van that were painted with the school name and mission.  We are grateful to God and those that contributed to the School Enhancement Plan. The inaugural trip will take students to Indian Creek Camp for the annual Student/Staff Retreat.  Other trips will be for Appalachia and to transport our sports teams. If you would like to support the students and the school’s mission you can still contribute the this year’s SEP or talk with Mrs. Teleah Valles-Peters, development office or Mrs. Fuentes, principal. To make a contribution today click here. 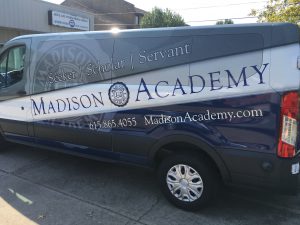 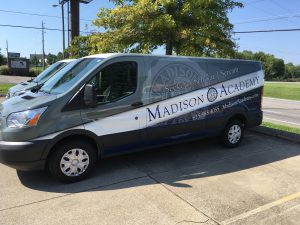 During an extended worship time Friday morning, Mr. Garren Carter school counselor shared with students and staff how Jesus communicates. Mr. Carter shared that 7% of what is communicated is done through words. Tone and volume of voice and well as non-verbal gestures make up the other 93% of how people communicate. He focused on the communication skills of both the rich young ruler and Jesus. To further illustrate Michael Jr’s be the punchline video was shown.  Both with the biblical story and the video Mr. Carter challenged everyone to acknowledge the resources and gifts of God to us and look for ways to help others with them.

His presentation was part of a week long focus this week at school on communication.  This is one of the 7Cs the school family considers a core values.  Earlier this week in chapel Mrs. Hardin shared worships on the power of kind words and the characteristics of self-talk.  In class Chaplin Jamieson used the bible and videos to illustrate how communication happens.