Two new classes began 2nd semester: Book Club and Golf.  Students’ desire to read some time-honored literature was the genesis of the Book Club class. Seniors Sydney Stewart and Ryan Downs approached Mr. Ryan Jamieson, our English teacher, to see if this class was even possible.  Mr. Jamieson was willing to give up his planning period at 7:45 am and so with administrative approval, the class was born.  By word of mouth, two more Seniors and one Junior joined.  The class meets on Monday and Wednesday mornings.

On the first day of the book club class students were asked by Mr. Jamieson to think of books from the literature that they would like to read—books that had stood the test of time.  Each student wrote a list of ten books they thought they would like to read and then Mr. Jamieson looked for books that were similar on each student’s list.  There were no similarities in the student book lists so they and Mr. Jamieson agreed to start working their way through Hamlet.  Other books will follow.  They hope to read a minimum of six books by the end of the semester.

The beginning of golf was a teacher-driven idea.  Mr. McKenzie during first semester finished the eSports class and proposed to the administration having a golf class that period.  It was agreed to and added to the schedule 8th period of the day on Tuesdays and Thursdays.  Four students signed up for the class.  Until the weather warms up students are practicing their putting skills here on campus. 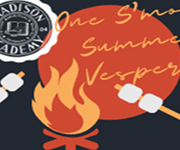 Podcasts are developed to share the story of Madison Academy

MA gives to others