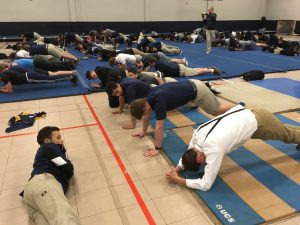 During assembly time, Wednesday, September 5, students changed out of school uniforms and into workout clothes and participated in the Fitness Gram test in the gym. This test measures student’s aerobic capacity in the pacer test, body composition with weight and height measurements, muscular strength in doing push-ups, muscular endurance in performing sit-ups and flexibility with the shoulder stretch and trunk lift. Those students that meet the national standards in each of these areas according to Coach Adams will have fewer health issues as they age and live longer.

Just under 50% of our student population met the Fitness Gram standards.  Here are the names of those that met or excelled beyond the standards.