Twenty three teams from across the mid-state participated in the annual late night volleyball tournament.  With so many teams this year the squads were randomly placed in the double elimination brackets.  The games started around 6:30pm and ended the next morning around 5am. Volleyball teams of all ages — elementary age to those eligible for AARP cards — were submitted to the Student Association sponsors.  Each played with a minimum of six players: four guys and two girls. When teams were not playing players took the responsibilities of referee and line judge.  For community members that came to watch the teams compete there were concessions available most of the night.  Here is a picture of the winning team. 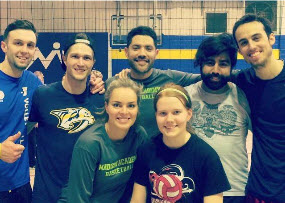